MAIA and Your Health

How dangerous is air pollution? The Global Burden of Disease is a groundbreaking study of what causes disease worldwide. It finds that breathing particulate matter air pollution (PM, see the second image below) is the largest environmental risk factor for premature death. In 2019, outdoor air pollution caused 4.1 million premature deaths, mostly in rapidly developing countries. Improving air quality can lengthen millions of lives. 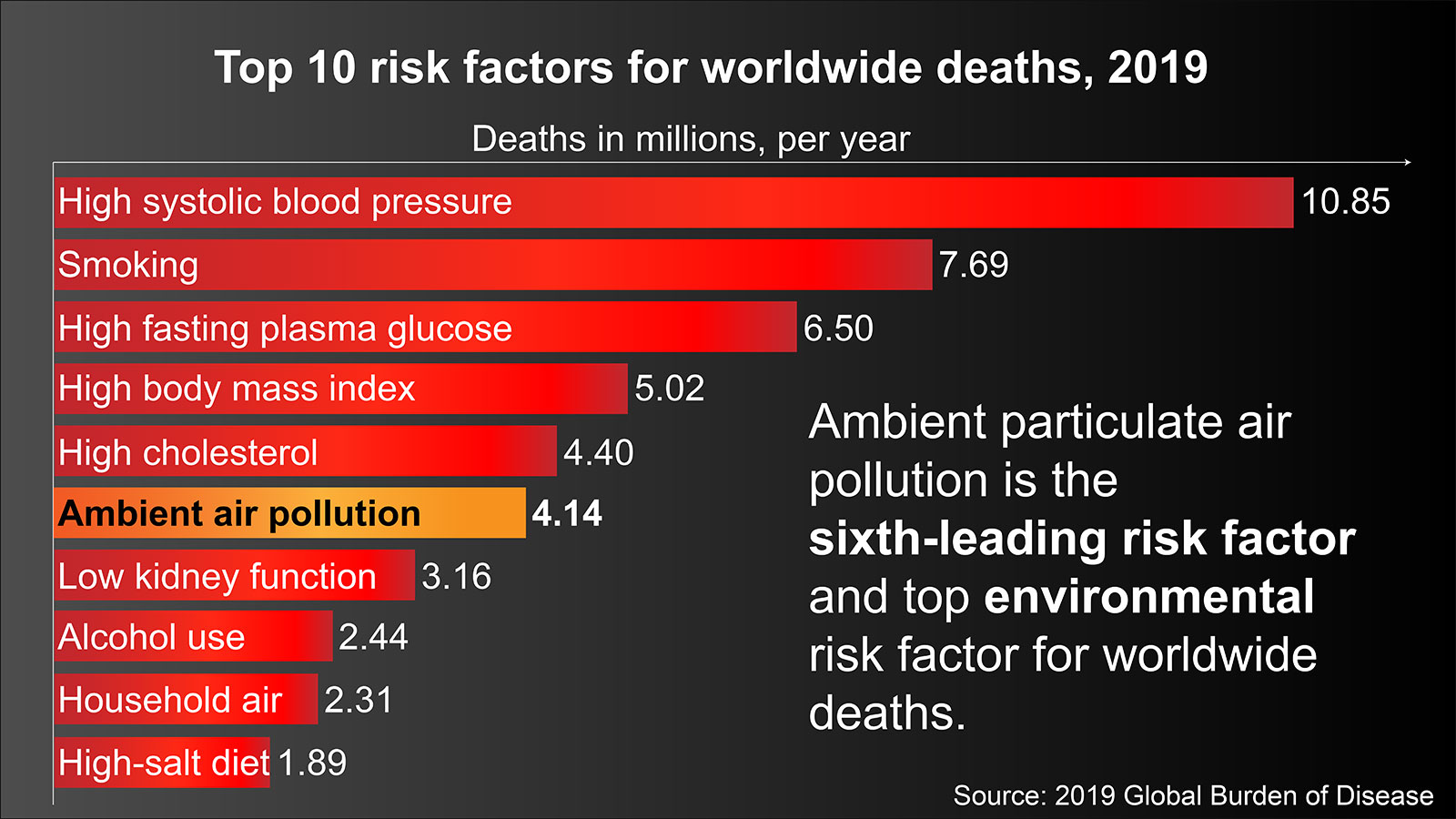 However, PM is complex: it’s made up of particles with different sizes, shapes, and chemical compositions. Furthermore, the amounts vary widely from place to place and from season to season. Scientists have shown that PM increases the risks of illness and premature death. Yet the relative danger of these different PM types is less well understood. The US Environmental Protection Agency (EPA) has said that we do not yet have sufficient measurements and studies to link types of air pollution to specific health effects. MAIA will provide a detailed view of key types of PM.

Some devices can measure the composition of airborne particulate matter (PM) at ground level by collecting the particles on filters inside the monitor. The filters are collected, weighed, and analyzed in a laboratory to calculate the amounts of various particle types. But this analysis takes time, so the data are not available right away. Other instruments measure only the total amount of PM and provide the data right away. These two types of monitors on the ground are the most accurate way of measuring the amount and types of PM. However, because PM changes from place to place, you need a lot of ground monitors to measure PM over an entire city.

Instruments on space satellites can observe large areas of the Earth. A satellite in an orbit like that planned for MAIA can see a particular city every few days. MAIA will focus on a selected set of urban areas around the world. Each target will cover an area of more than 27,000 square miles (70,000 square kilometers, about the size of West Virginia).

The MAIA instrument will collect data that can be used to calculate the physical properties of PM, like their size, shape, and how they reflect or absorb sunlight. To determine the chemical composition of tiny particles of air pollution, the MAIA measurements will be combined with information from surface monitors and chemical transport models. See The MAIA Investigation for more. 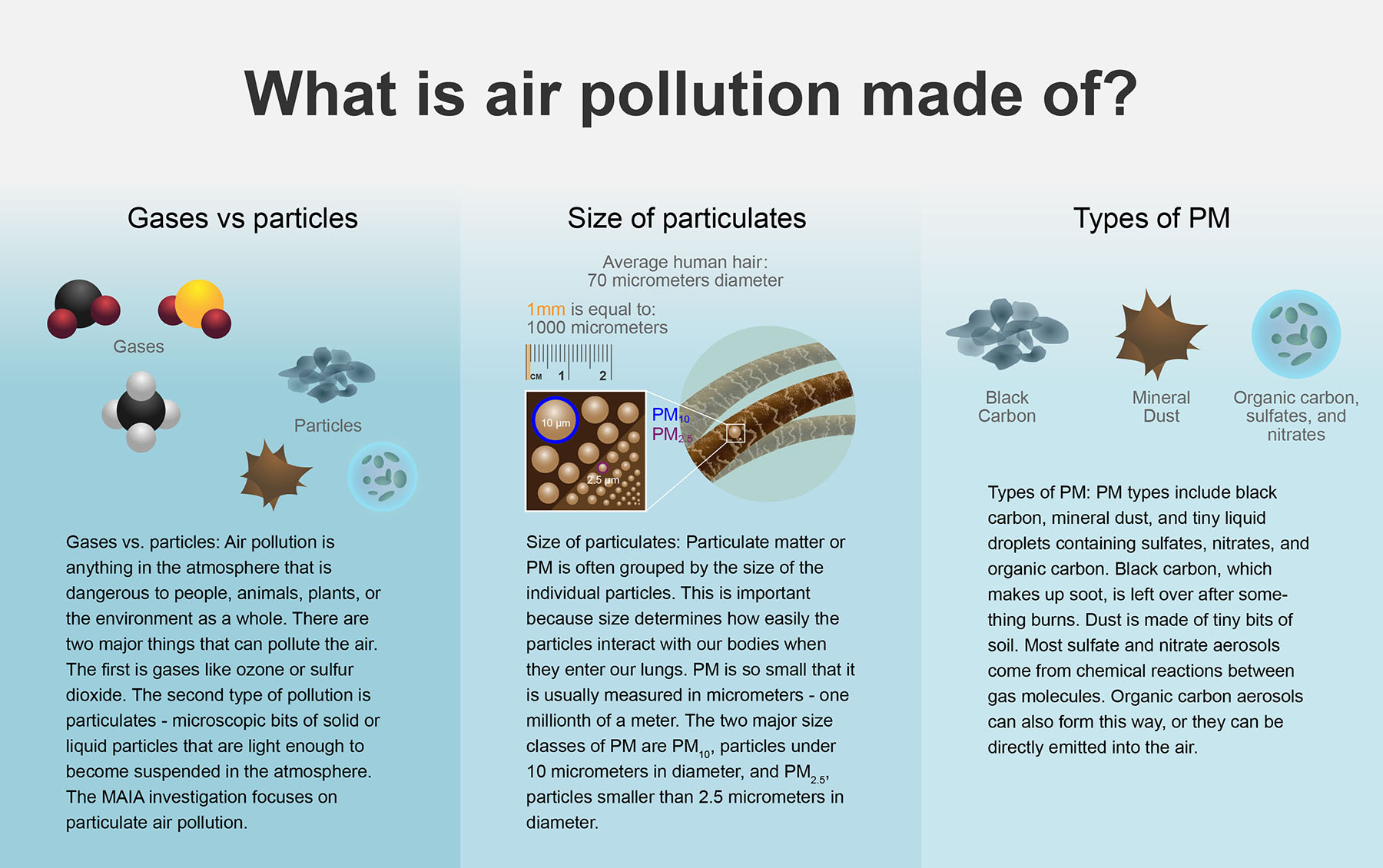 How does air pollution affect your health?

Many scientific studies have shown that breathing air pollution, specifically airborne particulate matter (PM), increases your risk of several health problems. This is because larger particles can irritate the lungs and smaller particles can cause inflammation that affects other organs. Scientists have found that breathing PM causes heart disease, heart attacks, and strokes. Other scientific studies show that people who breathe more PM are more likely to develop lung cancer, lower respiratory infections, chronic obstructive pulmonary disease (COPD), and a number of problems during pregnancy and birth, such as low birth weight and premature delivery. Every year, new studies suggest that PM could increase the risk of more diseases.

Click on the numbers on the figure below to learn more about the different ways PM can affect your health. 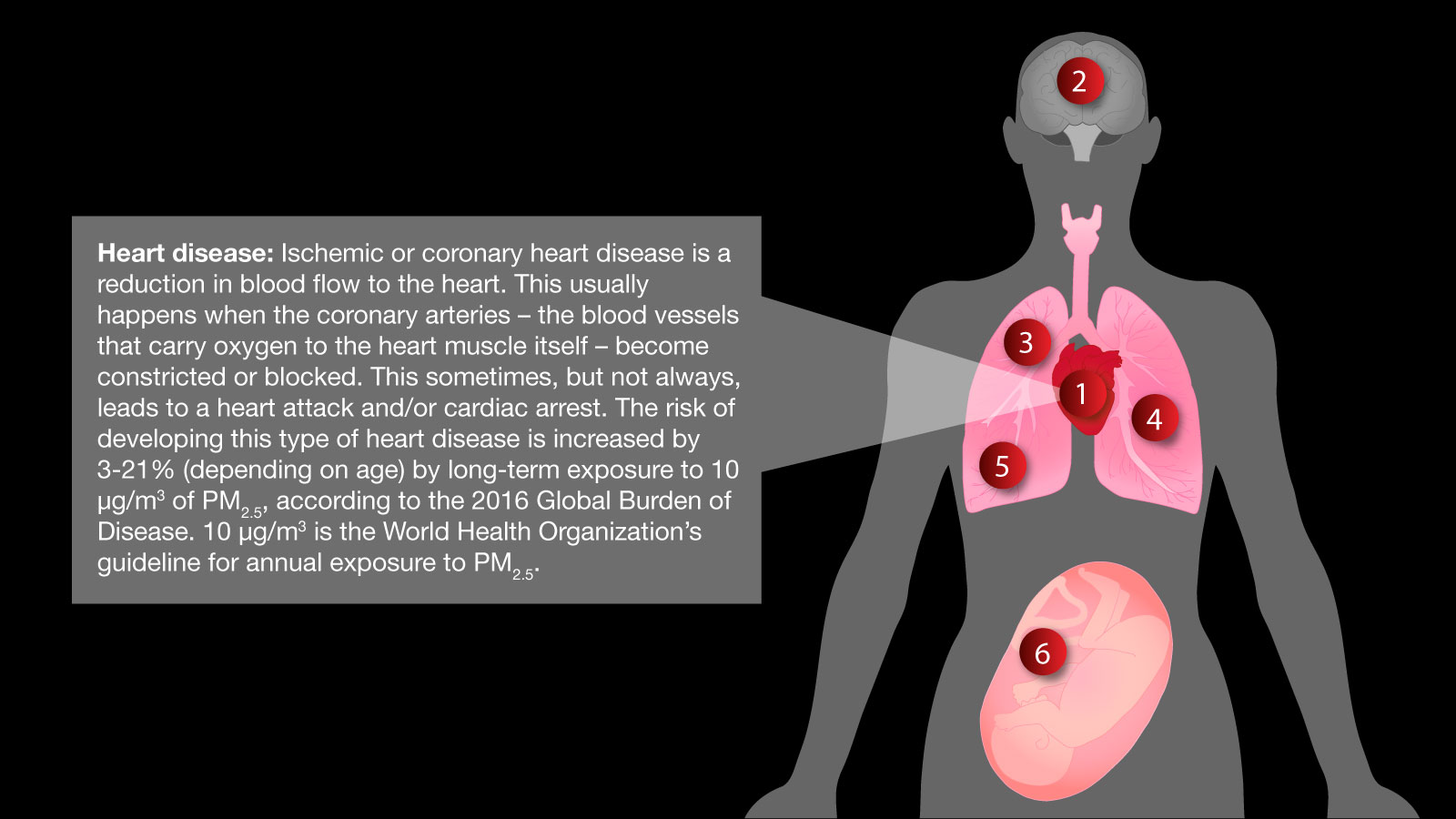 Who is affected worldwide?

The Global Burden of Disease estimates that in 2019, 4.1 million people died sooner than expected as a result of being exposed to airborne PM. This type of air pollution is the greatest risk to peoples’ health that comes from the environmental around them (as opposed to behavioral or genetic risks like smoking or high blood pressure). It is among the top ten risk factors in all 195 countries studied by the Global Burden of Disease. However, in some countries, the risk is much greater. In China and India, for example, particulate air pollution is responsible for 13.4% and 10.4% of all deaths, respectively—around 1 million premature deaths annually in each country. Most of deaths caused by particulate air pollution around the world were attributed to heart attacks (32.6%) and chronic obstructive pulmonary disease (COPD)(17.0%).

This map shows the percent of all deaths in each country linked to breathing PM air pollution, according to the Global Burden of Disease. The background shows a map of average PM amounts from 2001-2010 calculated from NASA satellite data and other sources. Search for or click on a country for more details.


How do scientists study air pollution and health?

The study of the causes, distribution, and frequency of disease is called epidemiology. Epidemiologists gather evidence to connect diseases to risk factors. This branch of science has existed since the nineteenth century, but epidemiologists first started studying air pollution in the 1950s. One well-known event in the field is the Great Smog of London in 1952, which lasted four days and was so thick that at least one theater cancelled an opera performance because customers couldn’t see the stage from their seats, even indoors. The UK Ministry of Health estimated two years later that between 3,500 and 4,000 people died because of the smog, most of whom had pre-existing lung or heart disease. Several laws were passed in the following years to try to reduce air pollution.

One challenge faced by epidemiologists is confounding factors. These are factors other than the risk being studied that could also cause a study participant to contract the disease. For example, in a study examining the connection between air pollution and lung cancer, epidemiologists would need to account for any participants who also smoke.

There are two basic ways that scientists are studying the impacts of air pollution and health: time-series studies and cohort studies.

In a time-series study, epidemiologists analyze records of deaths and hospitalizations in a particular city or urban area. They investigate the relationship between these records and the short-term concentrations of air pollution. These studies are effective since epidemiologists only need to account for confounding factors that change on a daily basis, such as the weather and the day of the week.

Cohort studies examine the impacts of long-term (one-year or more) exposure to air pollution on health. Epidemiologists follow a large group of people (tens of thousands to millions) for several years, tracking their health. After personal confounding factors like family history and smoking are taken into account, the epidemiologists can calculate the impact of air pollution on people’s chance of getting various diseases. Typically, cohort studies show that long-term exposure to air pollution is much more dangerous than the short-term effects demonstrated in time-series studies.

See MAIA Health Studies for more details on the studies MAIA will be conducting.