MAIA and Your Health

The MAIA investigation is how we will provide a highly detailed view of key types of particulate matter air pollution (PM).

The MAIA satellite instrument will view a set of Primary Target Areas from space.

This data will be combined with other information, including measurements from air pollution monitors on the ground and outputs from computer models. The results will be used to create daily maps of PM amounts in the Primary Target Areas.

These maps and health records will be used by epidemiologists to conduct health studies. The findings from these studies will provide information about which types of PM are most harmful.

MAIA’s Primary Target Areas (PTAs) are central to the investigation. Each PTA is a large metropolitan area where MAIA epidemiologists will study the impacts of various types of airborne particulate matter (PM) on human health. A candidate set of 12 Primary Target Areas has been selected based on:

The PTAs will be finalized before the MAIA instrument is launched. MAIA will also observe other types of targets:

Data collected by the MAIA instrument, orbiting the Earth at 740 kilometers overhead, needs to be able to tell a group of tiny sulfate particles apart from a group of equally tiny dust particles. This is certainly a challenge, but MAIA will be able to distinguish types of particulate matter (PM) based on how the particles reflect or absorb sunlight.

MAIA contains a specialized digital camera that peers at how the Sun’s light reflects off of the Earth and its atmosphere. This is no ordinary camera, however. It uses a combination of observing techniques to capture information about a layer of air pollution. Click on the parts of the MAIA instrument below to learn more about the technology that makes this possible, and scroll down to learn more about each part. 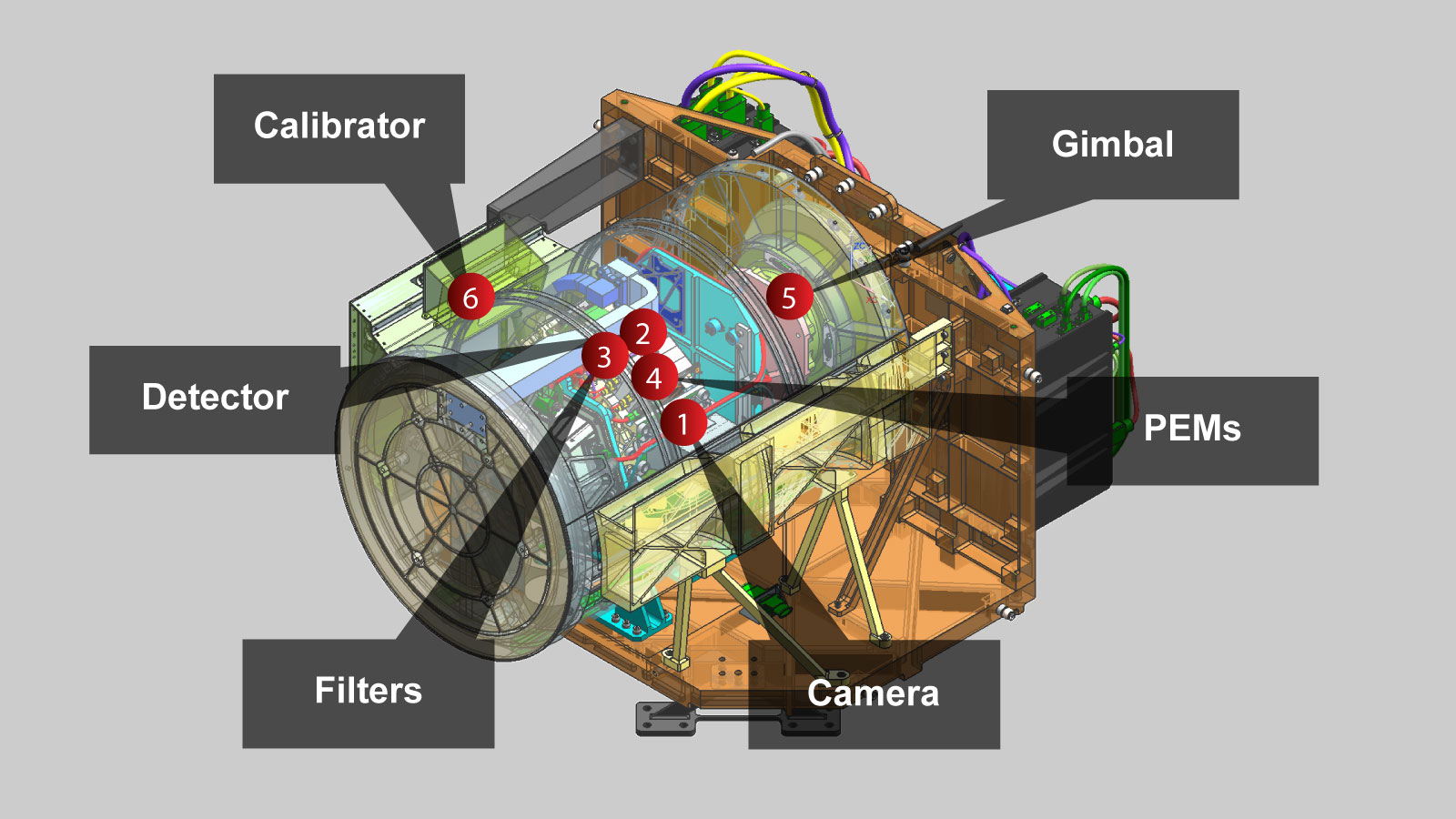 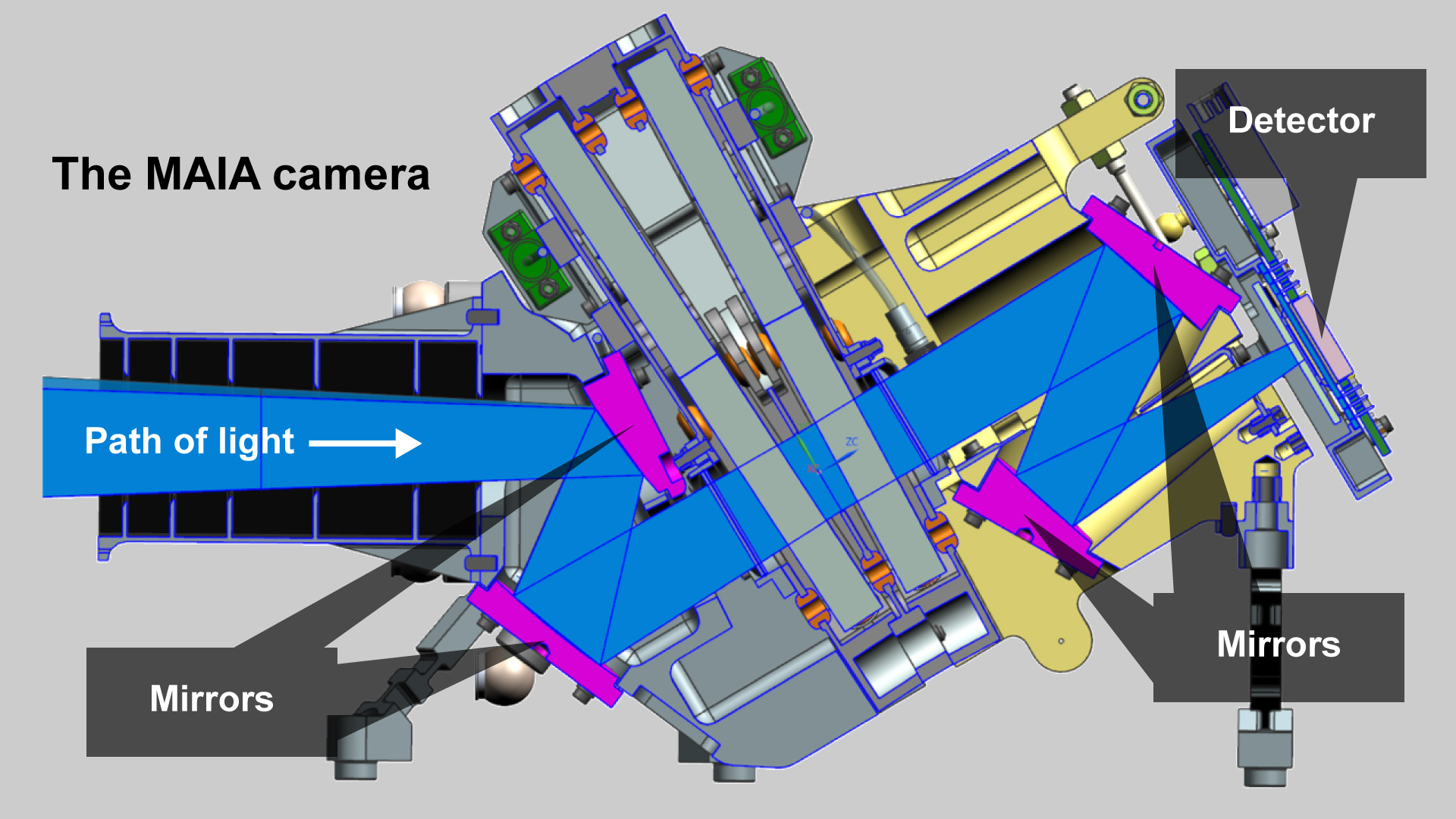 Camera: While your digital camera has lenses made of glass, MAIA’s camera uses a set of mirrors made of polished aluminum. It is designed this way so that the camera can record light at many more wavelengths than are seen by a conventional camera (see filters, below). 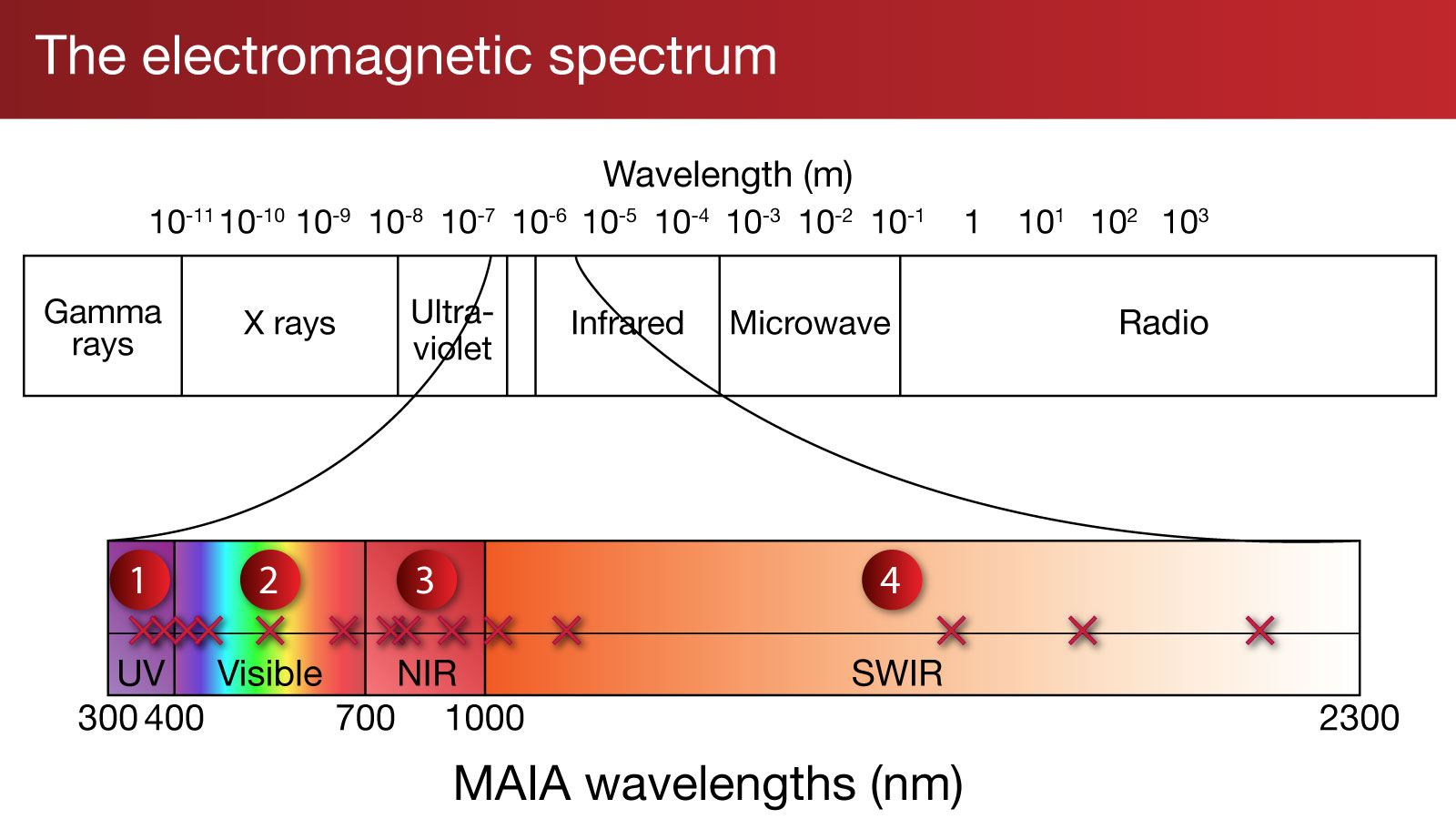 Filters: Your cell phone or digital camera uses three filters to capture red, green, and blue wavelengths of light, which are combined to make an image similar to what our eyes see. The MAIA instrument has 14 filters to capture not just visible light, but also ultraviolet, near-infrared, and shortwave-infrared. Why these wavelengths? Tiny PM particles tend to scatter light most efficiently at wavelengths similar to their own size, so shorter-wavelength visible spectral bands will provide information about the smallest aerosol particles (PM2.5 and smaller) while the shortwave infrared bands provide information about the larger types of aerosols in the atmosphere, like dust and volcanic ash. Ultraviolet wavelengths are sensitive to absorption of sunlight by particles containing certain types of minerals and organic matter.

Detector: A regular digital camera captures images using a rectangular array of detectors (pixels) with every snapshot. The MAIA camera uses a similar device, but its detectors are arranged in individual rows. This type of detector is called a pushbroom imager. As MAIA passes over the Earth, the motion of the satellite pushes the line array over the area like a broom being pushed across the floor. (A flatbed scanner is another example of a pushbroom imager.) The pushbroom technique requires each exposure to be very rapid, since MAIA’s host satellite will be traveling at about 25,000 kilometers per hour!

Gimbal: Have you ever noticed that when peering out an airplane window the atmosphere seems very clear when you look nearly straight down, but is much more hazy when you look toward the horizon? You’ve also probably observed several phenomena caused by the scattering of light at different angles relative to the Sun, like halos around the solar disk, or rainbows. Observing the atmosphere from an airplane or spacecraft at several angles makes the particles stand out more prominently against the surface background, and also gives us information about the size and shape of the particles within it. The MAIA camera is mounted on a motorized gimbal that can rotate 60 degrees forward and backward. As MAIA passes over a target on the Earth, the gimbal will rotate to point the camera at the target several times, capturing images from different angles. This technique is called “step and stare.” The gimbal can also point to the left or right, which allows the camera to see cities that aren’t directly underneath the satellite.
Click to enlarge image 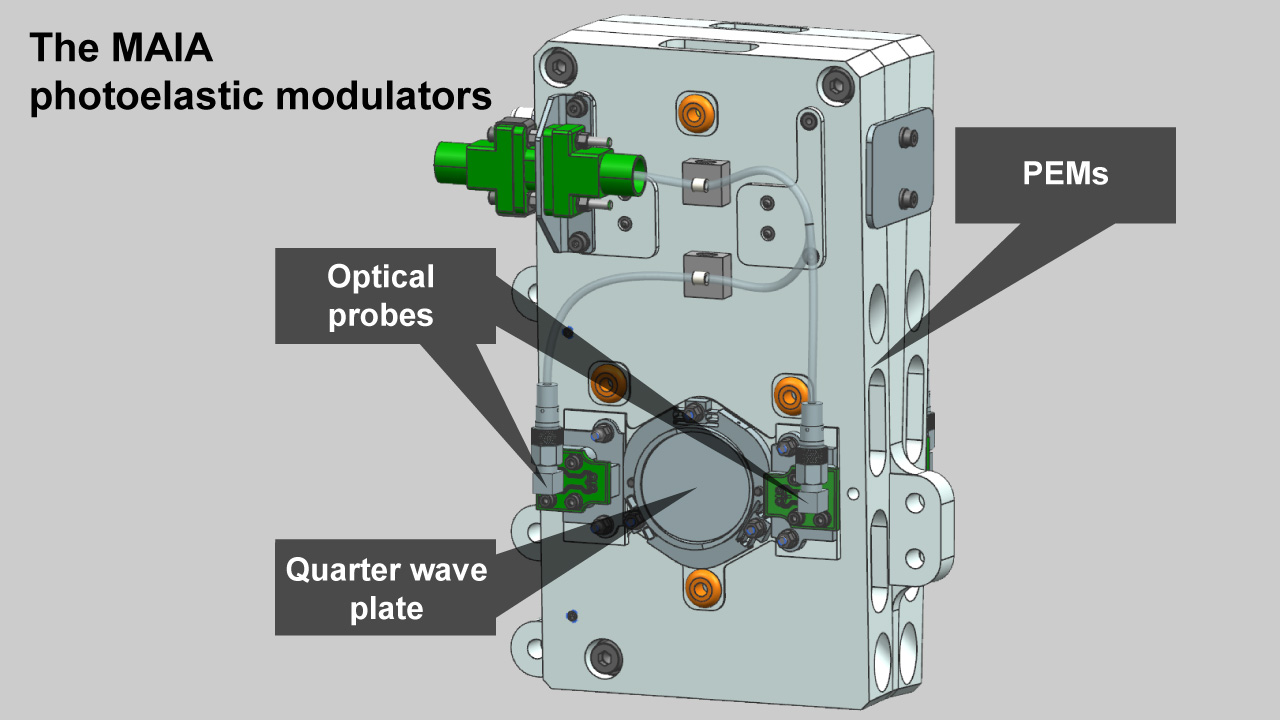 Photoelastic Modulators (PEMs): If you own a pair of polarized sunglasses, you might have noticed that the sky looks more or less hazy depending on how you tilt your head. This is because sunlight becomes polarized when it is scattered by airborne particles. The size and shape of the particles changes how much the light is polarized, and in what direction. The MAIA camera uses special devices called photoelastic modulators (PEMs) and quarter-wave plates (QWPs). When used in combination with polarizing filters placed above the camera’s detectors, MAIA is able to make accurate measurements of the degree to which the incoming light is polarized by particles in the atmosphere. 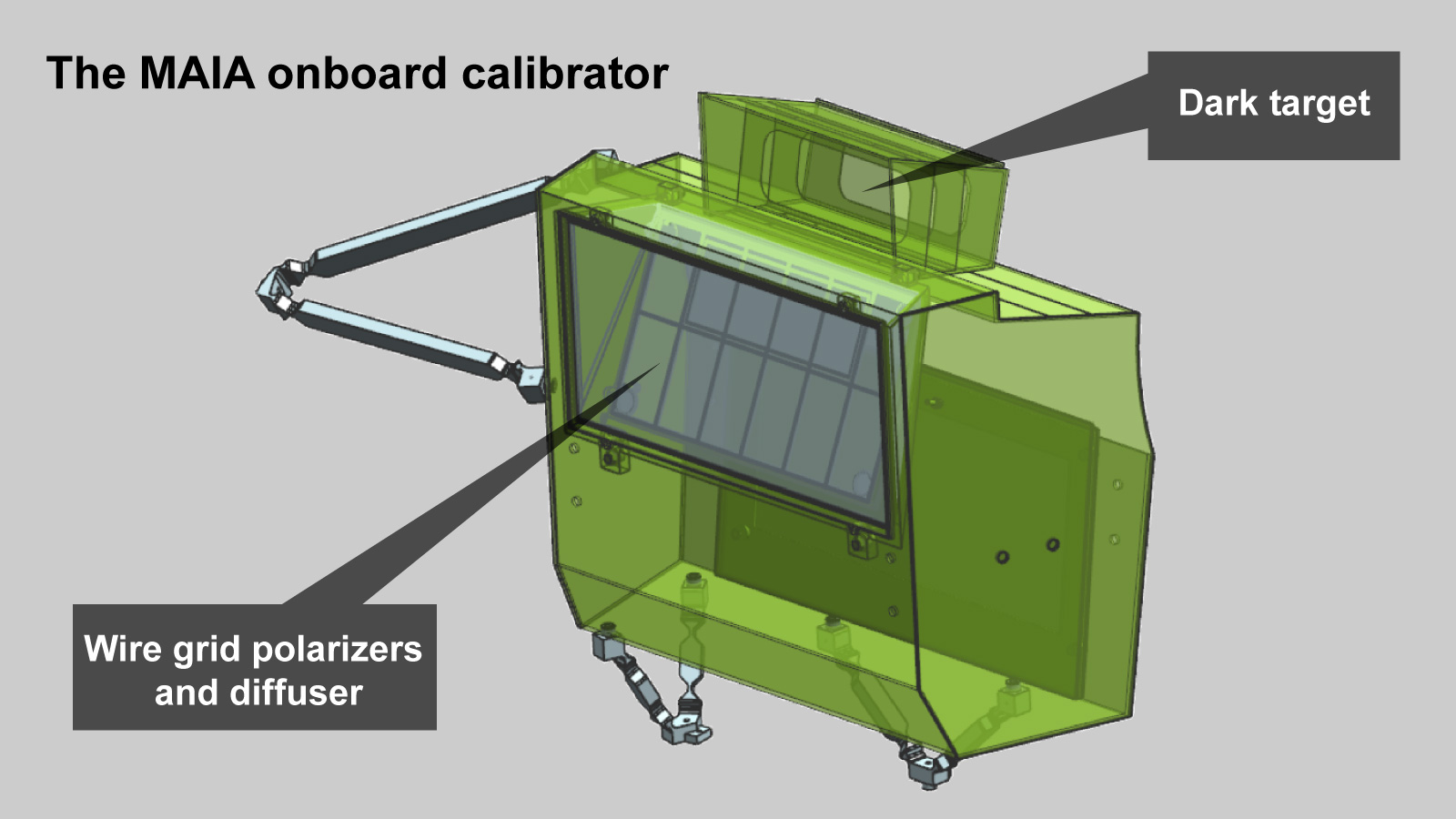 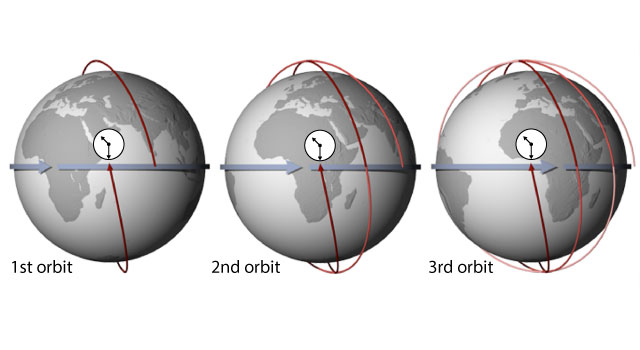 The MAIA instrument will ride on a commercial host satellite, known as Orbital Test Bed (OTB)-2, provided by General Atomics Electromagnetic Systems. This satellite will be launched into low-Earth polar orbit, passing close to the north and south pole on each orbit. The baseline orbit altitude is 740 km, and the expected launch date is in 2022 (to be confirmed). The orbit will be “sun-synchronous,” which means that every time the satellite crosses the equator (roughly every 100 minutes), the local time will be the same. This type of orbit is important for MAIA because it will see each city at approximately the same time of day every time it passes overhead. (Imagine how difficult it would be to study particles in the atmosphere if you were comparing one image taken mid-morning and another taken at sunset.) 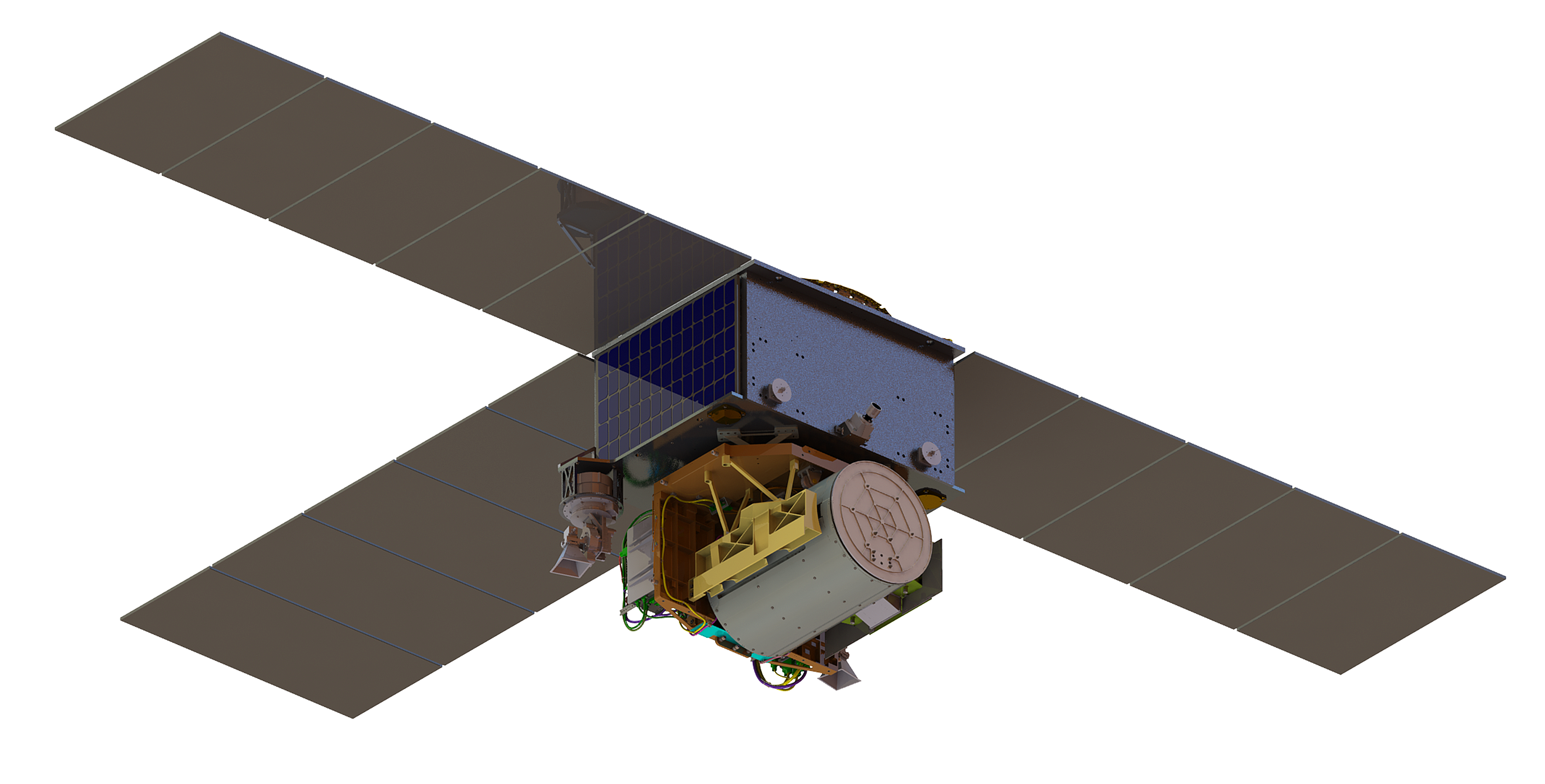 In September 2018 NASA awarded the contract for hosting the MAIA instrument to General Atomics Electromagnetic Systems (GA-EMS). The instrument will fly on the GA-EMS Orbital Test Bed (OTB)-2 satellite. GA-EMS will install the MAIA instrument on their OTB-2 satellite, perform pre-launch testing to prepare the integrated system for operation in space, and operate the satellite once it is launched into Earth orbit. Launch is currently planned for 2022.

The OTB-2 is a larger version of GA-EMS’ OTB-1 spacecraft, which will carry JPL’s Deep Space Atomic Clock into Earth orbit. The larger size and enhanced capabilities of OTB-2 are needed to accommodate the MAIA instrument and its high speed data link. Three deployable solar panels and two additional solar panels attached to the spacecraft body will provide electrical power.

From satellite data to PM10 and PM2.5 maps

Once MAIA has observed a target, the next step is to transform the raw data into maps of particulate matter concentrations.

More details about the data products are available on the applications page. 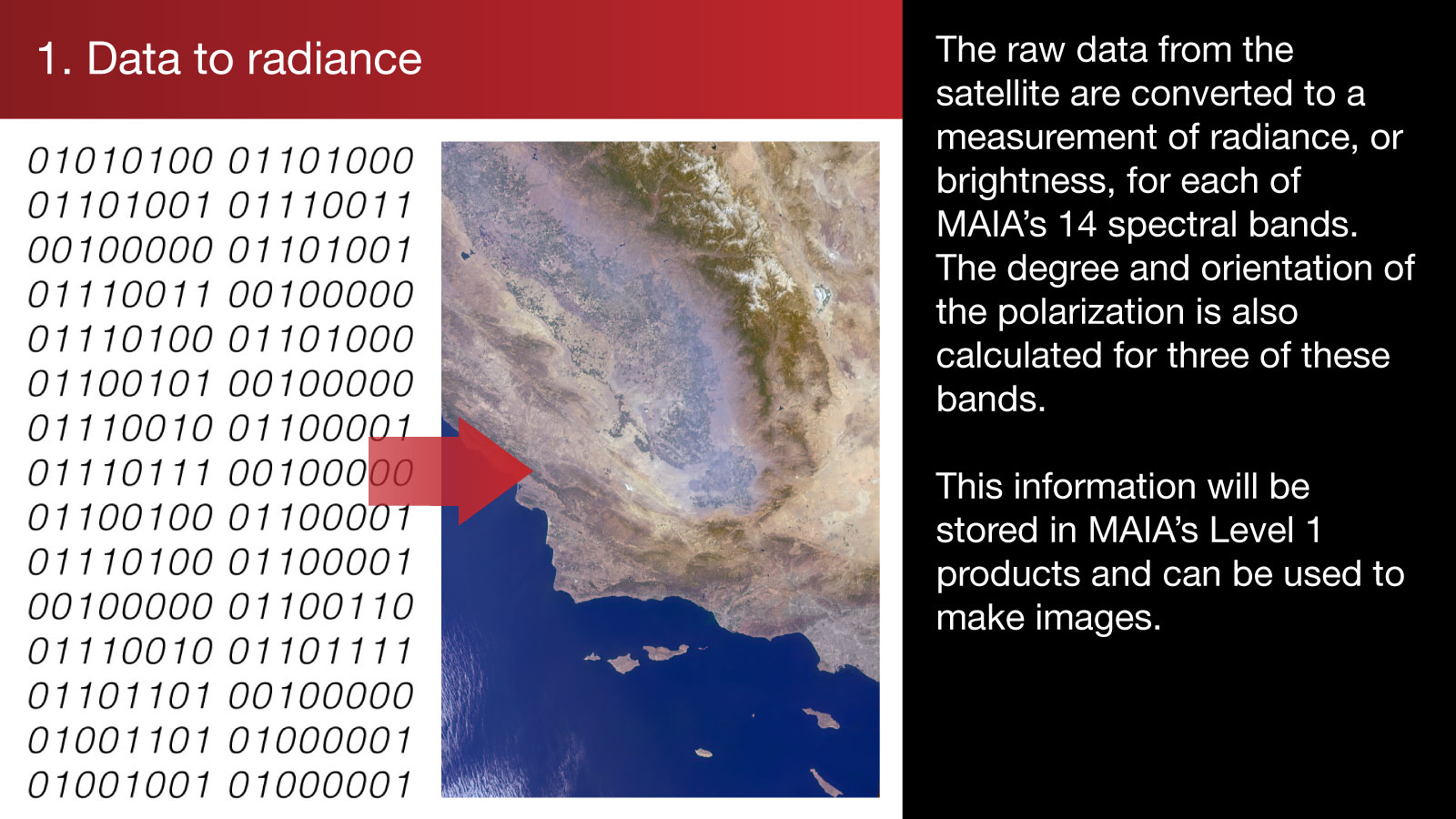 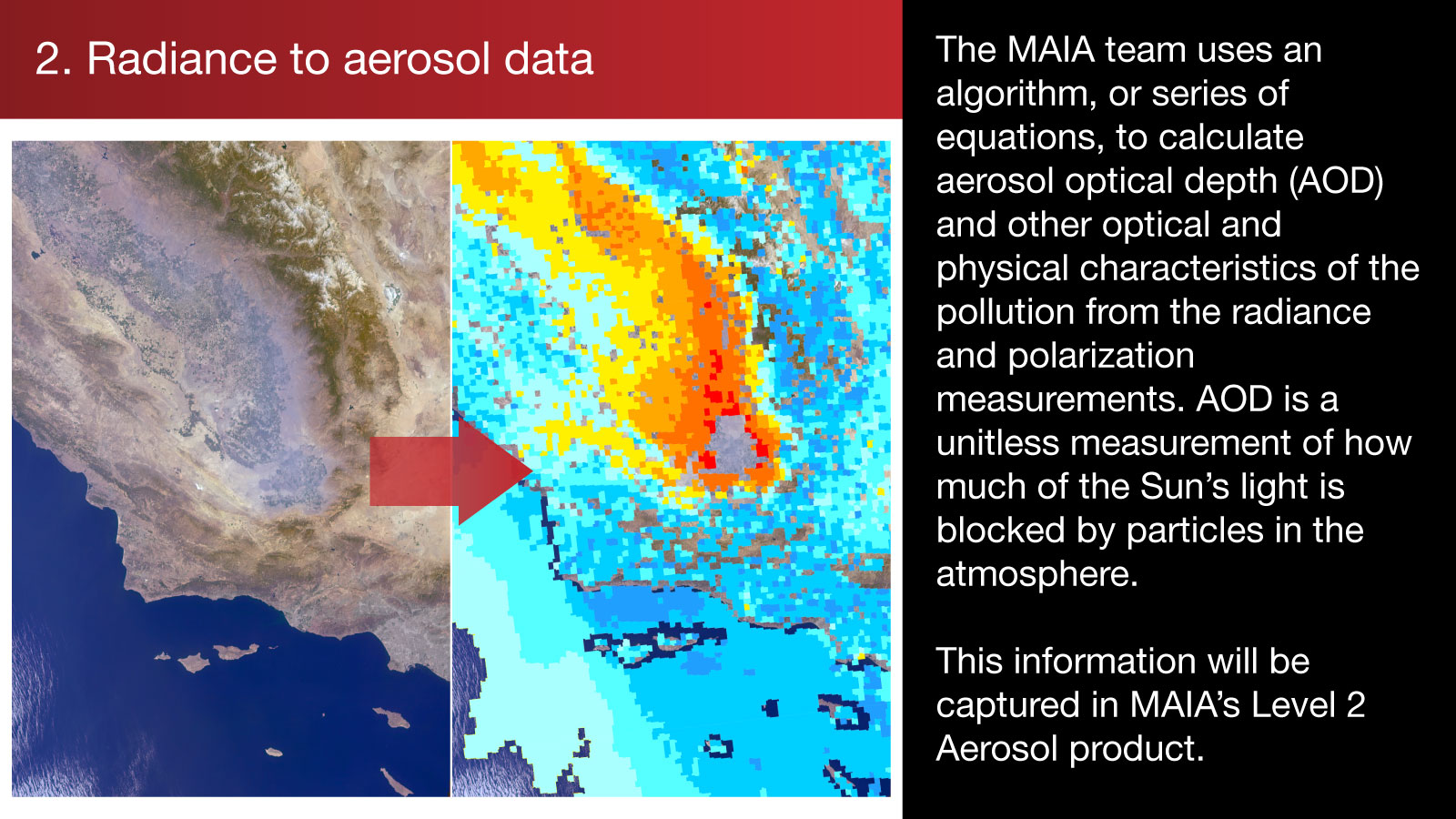 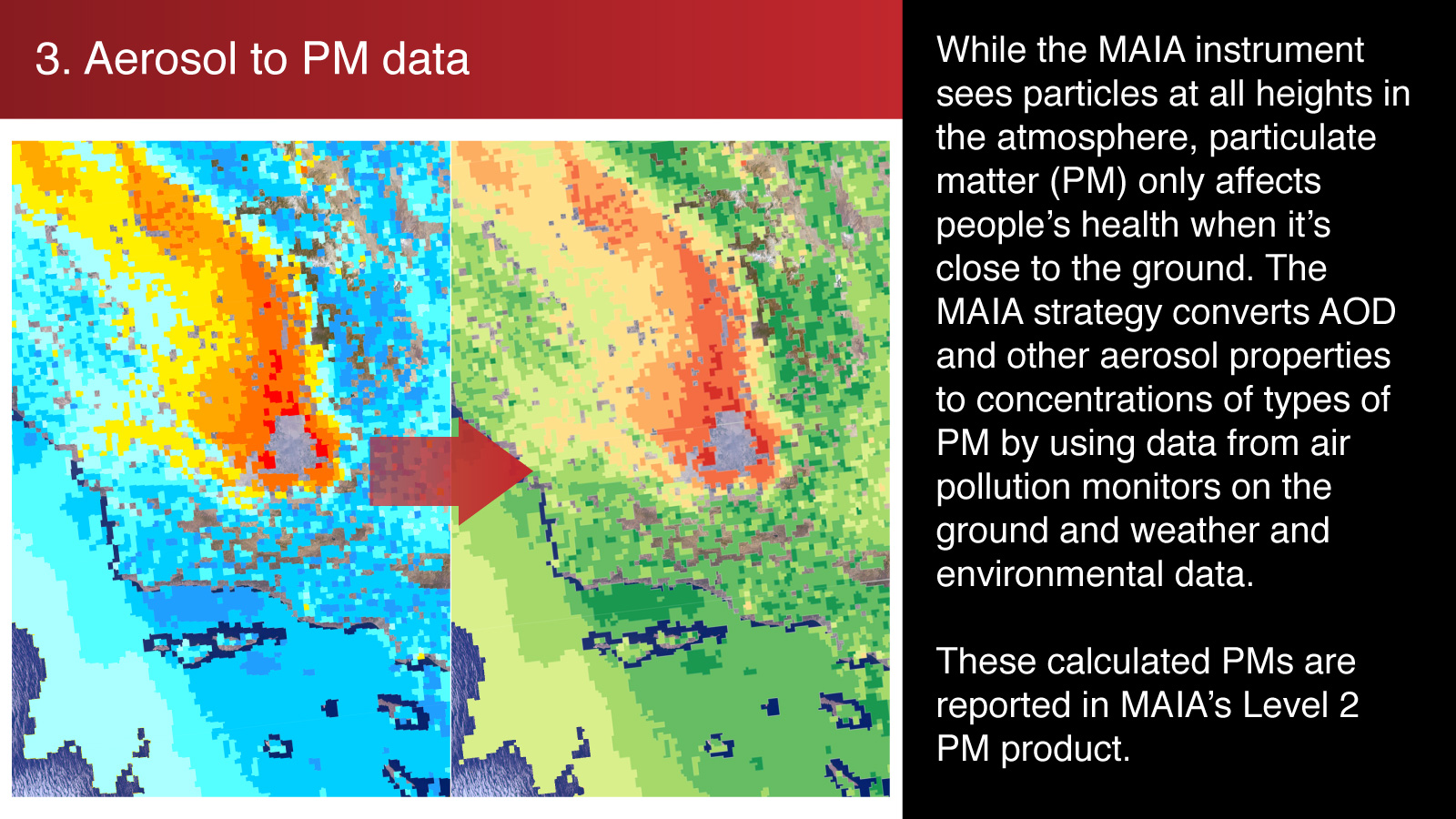 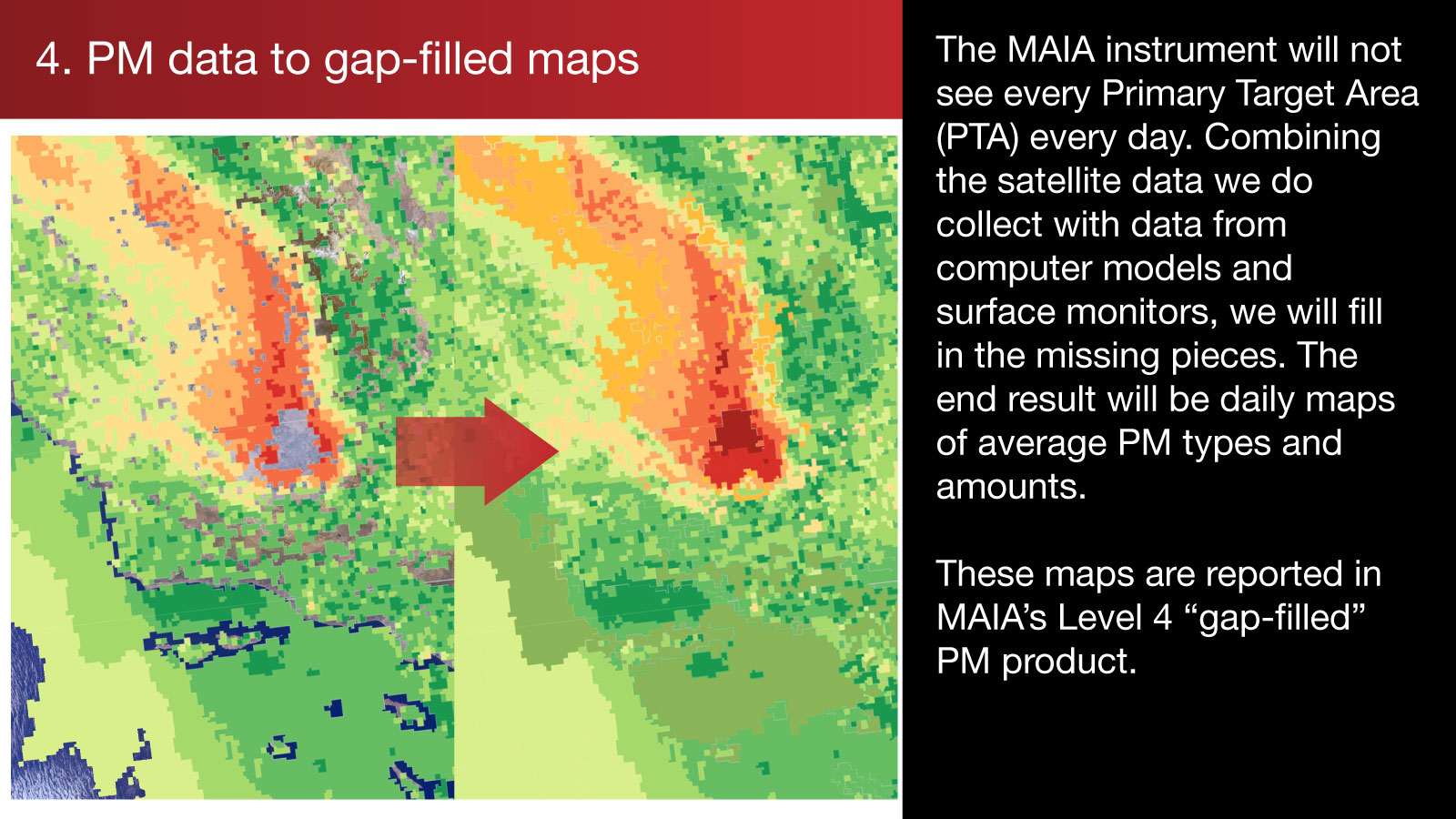 Use of MAIA data in health studies

Different epidemiological studies are planned for each Primary Target Area (PTA) depending on the type of health records available, what studies have been done in the past, and the types of particulate matter (PM) in the PTA. Studies in each PTA will focus on the health impacts associated with exposure to PM over one or more of the following timescales: 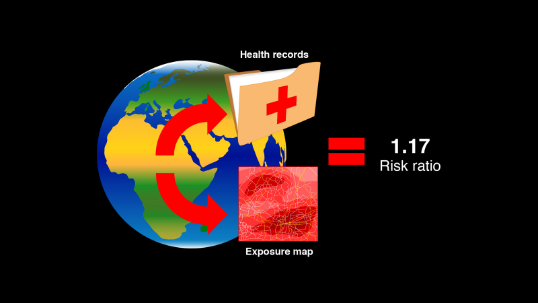